December has ended and we have once again a reason to create a yearly summary of the real estate market. On the one part, December was the quietest month of the second half-year (1,783 sales-purchase transactions), on the other part, however, the month with the highest transaction prices (median price 1,558 €/m2). 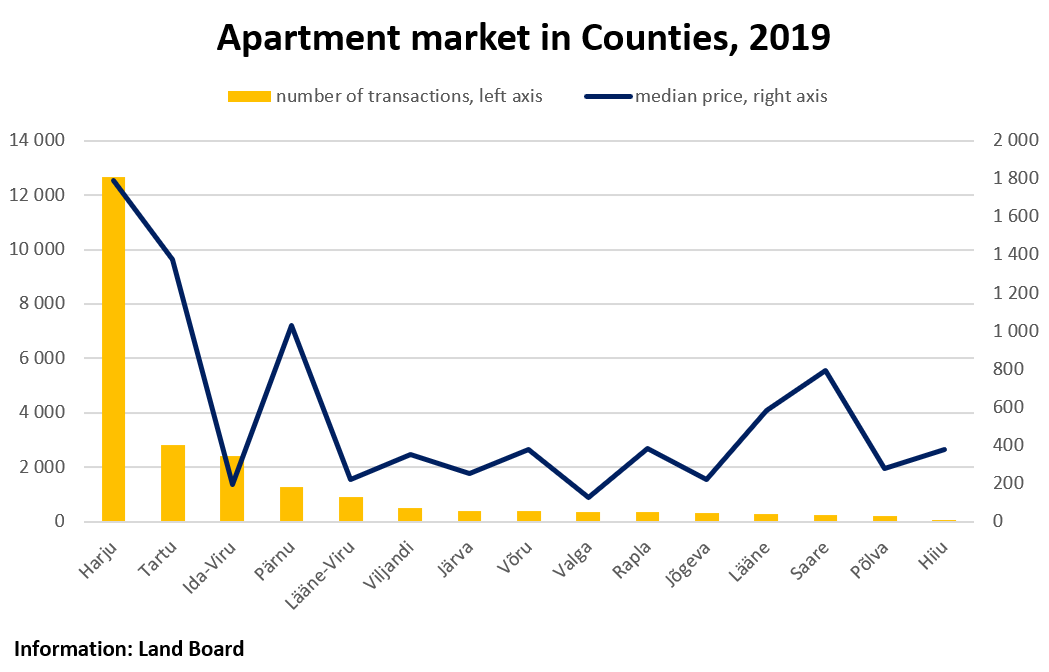 In Tallinn, 846 sales-purchase transactions were concluded in December, which, when looking at the whole year, was inferior to only October and November. That, however, meant a very active last quarter of the year where over 200 more transactions than in the 3rd quarter were concluded. 338 transactions out of the 846 were first-hand sales, which took the share of transactions with new developments to 40%, i.e. the highest figure of the year. The high share influenced the price level; for the first time, the median price of transactions crossed the line of 2,000 €/m2 (i.e. 2,133 €/m2), which was the highest level of all time. The bold 4th quarter meant that in 2019, the median price increased even by 7.3% in comparison to last year, which was caused by increasingly rapid price increase both in the market of new developments and the secondary market. 9,785 sales-purchase transactions of apartment ownerships were concluded in 2019, which was quite similar to the 9,760 transactions in 2017 and the 9,700 transactions in 2018. Such stability suggests that the time for large market growth is behind us, the level of new developments has stayed at the same level (about 30%), whereas the secondary market has remained stable already since 2013. As calmer times are predicted in the economy and the volume of new developments will remain very similar also in 2020, no major changes are to be expected this year.

In comparison to the rest of the year, this December was less active than average. 141 transactions were concluded in December, of which 40 (i.e. over 28%) were transactions with new developments. Such division of transactions raised the median price a little higher than the average level of the year, to 1,473 €/m2. In comparison to last December, both the activity and the price level were rather similar. To sum up, it may be admitted that 2019 was a year of calmer development in Tartu. The number of transactions concluded with new developments was 485, i.e. 58 less than in 2018, but the activity of the secondary market was the highest of the decade, increasing the number of transactions to 2,012, i.e. to the highest level since 2017. The increase in the median price was supported by quick increase in incomes and consumer confidence; the figure was 1,443 €/m2 (i.e. 4.1%) based on the transactions in 2019. Due to the lower share of new developments, the growth in the median price slowed down nearly twice.

Market of apartment ownerships in Pärnu, 2019

In Narva, December was a rather placid month, as only 53 sales-purchase transactions were concluded. That was some transactions more than in July or August but in the context of year 2019, which as a whole was the most active one of the past decade, December did not stand out too much. 759 transactions were concluded during the year, which was 25 more than in 2017 and 50 more than in 2018. A slight increase in the asking price has also put a stop to the price decrease. However, in one of the poorest municipalities in terms of socio-economic indicators, the past decade in the real estate market has been a “lost decade”. The price level reached the top in 2014 when the median price was 474 €/m2. The price level has been dropping ever since, reaching 391 €/m2 by 2019. The increase in the number of transactions is positive, however, it would also require a price increase in order to reflect positive changes in the market of Narva.