Even though the market of new developments has remained active in Tallinn and there have been no big leaps in the speed of stock absorption, an increasing uncertainty can be sensed among the developers, extending the presale period of developments. The developers want to make sure that there is a sufficient number of potential buyers before they start the construction. The sales in the secondary market have been stable, therefore, the number of transactions is mainly shaped by new developments. As a smaller number of new developments are to be completed this year than last year, the 3rd quarter of this year is characterized by a bigger fall in the number of transactions.

2194 transactions were concluded in the 3rd quarter, which was 200 transactions less than a year ago. As we can remember, 2,401 and 2,583 transactions were concluded in the first two quarters of the year. Considering the current activity, 2,400 to 2,500 is probably the peak number of transactions, and it will not change considerably any more. As to the price increase, there is probably moderate optimism due to the continued increase in the price of inputs (shaped mainly by the increased salaries): the price increase has still gradually started to slow down, for instance, the median price during the last four quarters has remained between 1,746 and 1,754 EUR/m2. During the first nine months of this year, the median price has increased by 6.5% but next year also the increase of this figure will slow down. 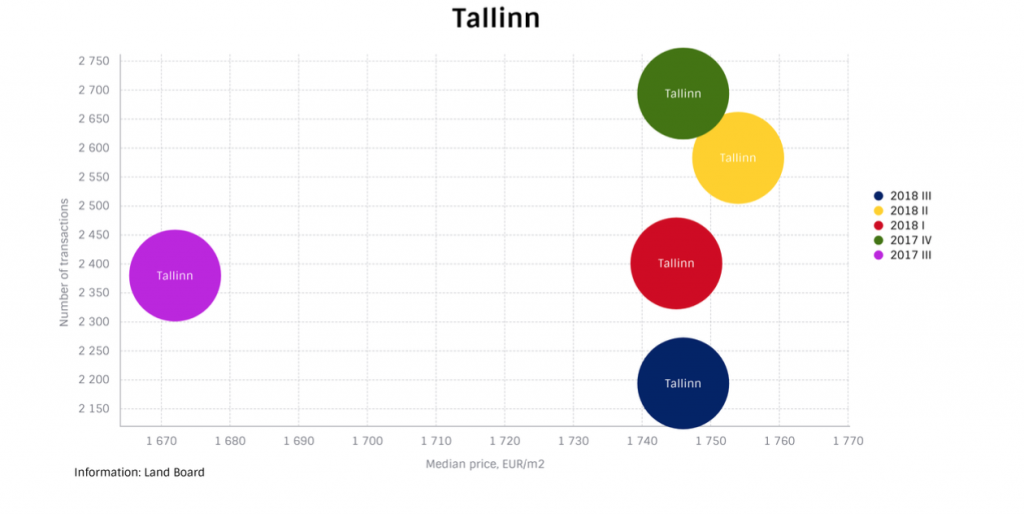 Next to the standstill in Tallinn, the greatest riser this year was namely Tartu, which is also supported by the low comparison base of last year. In the first nine months of the year, the number of transactions in Tartu has increased by 15% and the median price by 8.4%. On quarterly basis, both of the figures have still remained stable, especially the median price which has remained between 1,300 and 1,400 EUR/m2 during the past year. In the 3rd quarter, the number of transactions exceeded the line of 500, which was by over 30 more than during the same period last year but leaving aside the low baseline, the market has shown signs of becoming more stable, similarly to Tallinn.

In Pärnu, the offering of apartments exceeds the same period last year by nearly 200. That is greatly based on the active market of new developments, which has increased the selection. As the price expectations are still high in Pärnu (the average asking price is about 1,550 EUR/m2, the transaction price nearly 500 EUR/m2 lower), the sales periods of apartments have extended in Pärnu. The stability of the median price implies that for many apartments, people are not ready to go along with the price increase.

Even though the market of new developments shows increasing activity, it has not been reflected yet in the number of transactions of the current year – compared to the same period last year, in the first nine months of the year, slightly over 50 transactions less were concluded; also in the 3rd quarter of this year, 30 transactions less were concluded due to the high baseline of last year. However, the number of transactions has remained stable; during the past eight quarters, less than 200 transactions have been concluded only once. Even though in comparison to the same period last year the median price increased again over 10% in the 3rd quarter, the median price has remained virtually the same for the past four quarters (between 1,150 and 1,190 EUR/m2). 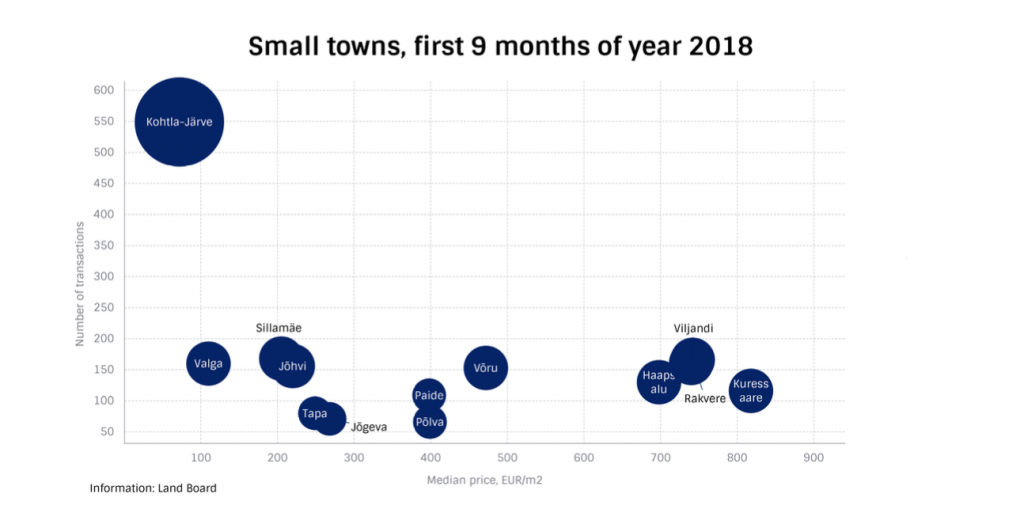 In comparison to the same period last year, the number of transactions has mainly dropped in the more active small towns during the first nine months of the current year. Mainly due to the low baseline of last year, a positive growth can be observed in Jõhvi and Sillamäe; also Tapa is continually popular, thanks to the development of the national defence area. The number of offers, however, has not significantly changed in most of the small towns, the asking prices have remained the same, whereas the sales periods have prolonged. Thus, there is a considerable amount of real estate that is not considered feasible to be bought at the asking price. It is highly likely that the anyway small number of buyers has reached their price limit, and therefore, with the price increase, the number of transactions has moved to the opposite direction.

The median price reflects the reputation of the small towns rather well – outside Harju County, next to Tallinn, Tartu and Pärnu, people most appreciate Kuressaare, Rakvere and Viljandi where the prices have somewhat increased during the past year, even by over 100 EUR/m2 in Rakvere and Viljandi. Prices have increased in most of the towns. The development of Tapa has been especially impressive – it has behaved in the market context like a country of its own. In year 2016, the median price of transactions was still 111 EUR/m2, in 2018, however, already 249 EUR/m2. Such a development continues to give hope that if a larger organisation happens to emerge in a small town, it does not take long until positive effects follow. 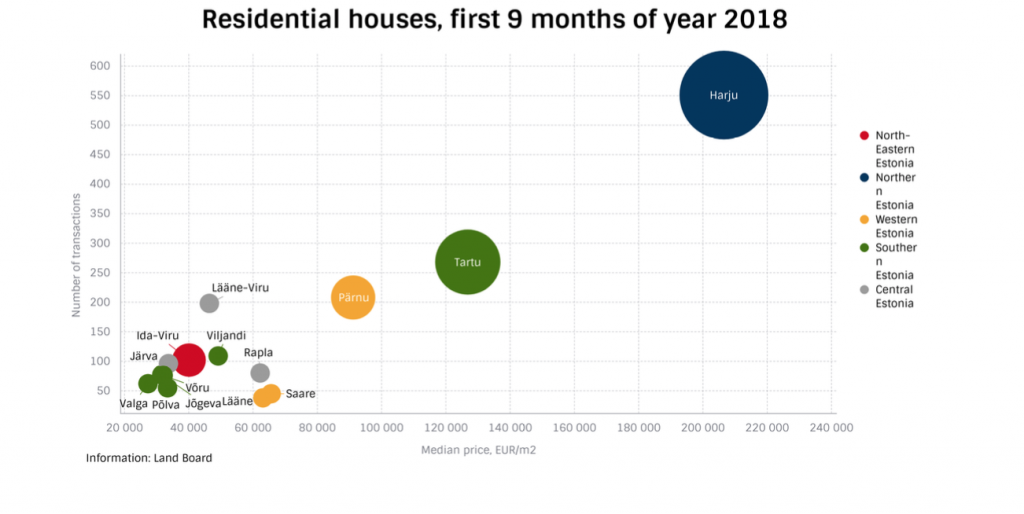