June finished up the first half of the year, giving us a chance to stop for a moment and take a longer look at the changes having taken place over a longer period than the usual month. Even though the Estonian real estate market has developed at different speeds and in different directions, the total picture we have is rather positive, based on both the statistics and the general sentiment. Increased wealth and security has enabled more and more people purchase real estate, making it possible to shape a suitable environment supporting the development of personal life. The geography of new developments is expanding year-by-year, and based on the activity of Tallinn as the largest market it can be seen that regardless of the large construction volumes, interest in new apartments is still great, which in turn also supports the sustainability of the secondary market.

Unlike the number of transactions, the growth in the median price was extensive: in comparison to the same period last year, the median price of transactions increased in ten counties. Even though the better part belongs to new developments still dominated by Harju County, changes have taken place also in the secondary market where the price increase does not give reason to talk only about the influence of new developments. The total median price of transactions in the 1st six months of year 2018 was 1,348 EUR/m2, and in comparison to the same period last year, it increased even by 13.1%. Such a quick increase in price has surpassed even the boldest of forecasts and was definitely facilitated by various factors, including the increase in the construction prices that exceeded all expectations. The median price was highest in Harju County (1,673 EUR/m2) where the prices increased by 8.3%, followed by Tartu County (1,314 EUR/m2) and Pärnu County (986 EUR/m2) – in the latter two, the prices increased over 10%. 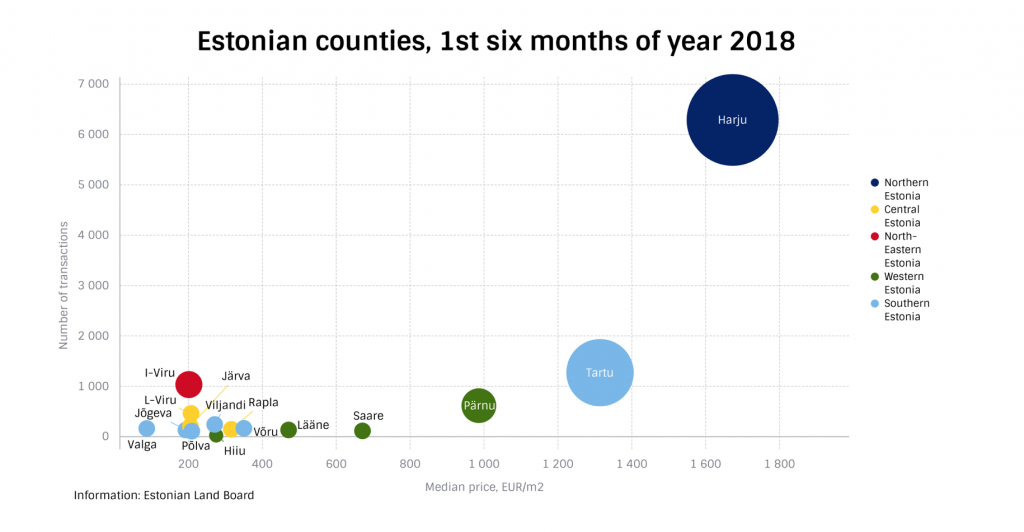 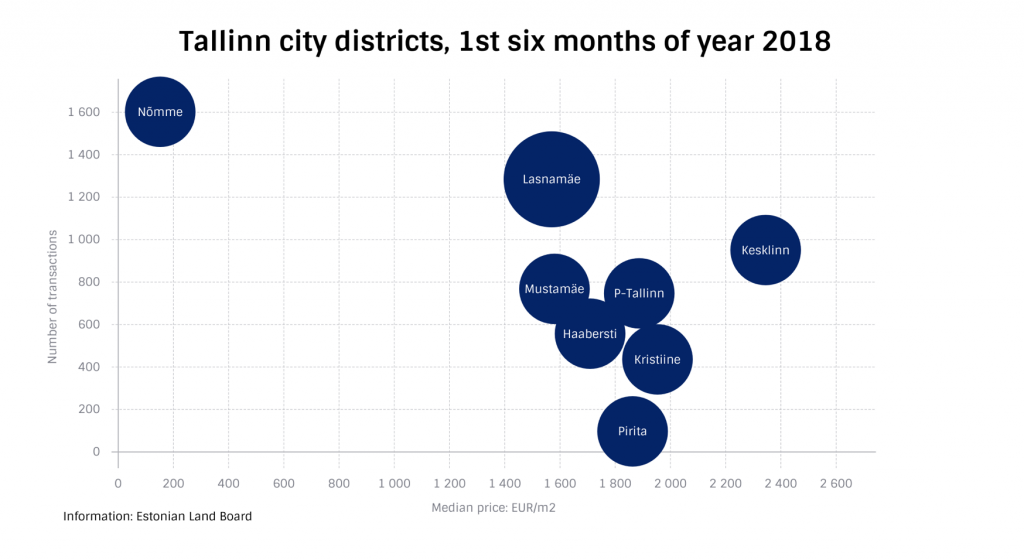 In Tartu, compared to the same period last year, the number of transactions increased by more than 150 and the median price more than 20%. Such a strong growth was based on the increased share of new developments as well as the general price increase that has not left also the cheaper-end apartments in panel buildings untouched. In the 1st six months of 2018, 931 sale/purchase contracts were concluded in Tartu, the median price was 1,361 EUR/m2.

As to Pärnu, when adding up the data of this year, it can be confirmed that a large increase is usually followed by calmer development. The market of Pärnu awakened largely in year 2017, and the 1st half of year 2018 did not reach such a level of transactions. In the 1st six months of this year, 398 transactions were concluded, which is by 23 transactions less than last year. However, the median price of the transactions continued to grow virtually in a similar way – by 12.8% (1,195 EUR/m2).

Regardless of the social events influencing the image of Narva, peaked by the temporary movement of the President’s Office, no effect of those can yet be observed in the real estate market of Narva. It is possibly the beginning of a chain of positive events taking place with a certain delay. It is clear that in the interest of the development of Narva and Ida-Viru County on a wider scale, it must be preserved as an integral part of Estonia. In the 1st six months of 2018, 332 transactions with apartment ownerships were concluded in Narva, the median price was 403 EUR/m2. Even though the median price was similar to the same period last year, the number of transactions was lower by nearly 60. 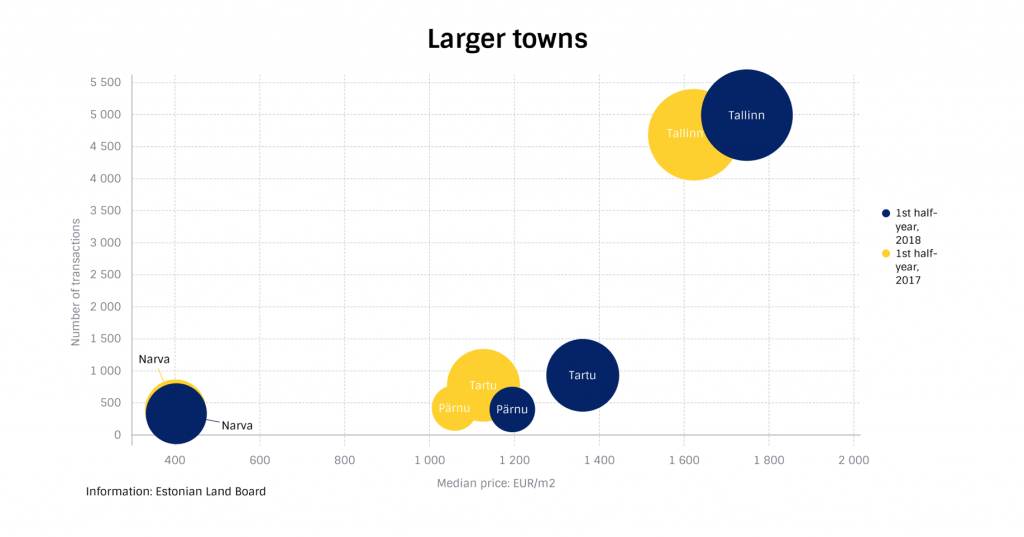 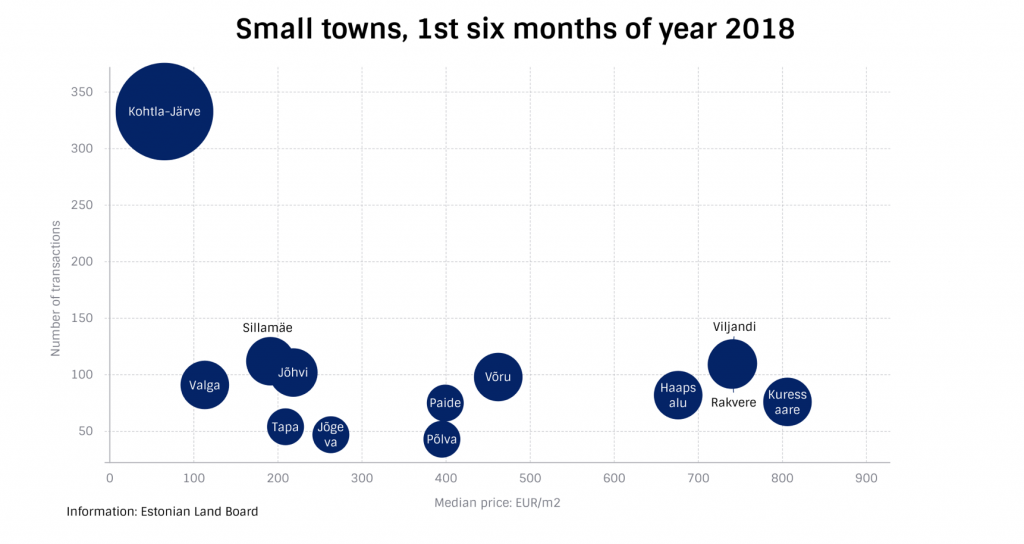 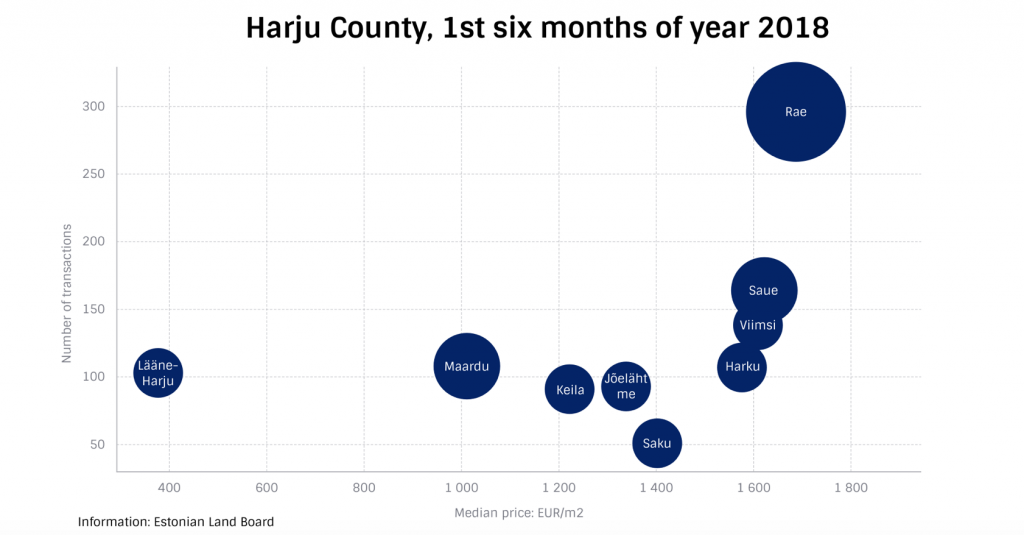