In October, the people visiting the real estate conference of EKFL admitted that the sentiment of the participants in the real estate market is rather positive and no bigger systematic risks are predicted for the next few years.

When looking at important indicators more widely, it may be true. However, we know that people are no more competent than chimpanzees at predicting major crises. It is true that people do not speak of a completely cloudless sky; from time to time, the aging and shrinking of our population is mentioned, which could translate to a lower number of transactions in the real estate market in the future. When speaking of demographics, it is good to remember that the number of people who are mainly carrying out real estate transactions these days, i.e. people between 25 and 39, has not significantly changed in the past five years. In 2013, the number of such people in Estonia was 278,914, last year, however, 281,175. As for the next five years, it would be necessary to look at the change in the number of tomorrow’s buyers, i.e. people between 20 and 34. In 2013, there were 277,234 such people, in 2018, however, 254,951 people, i.e. 22,000 people less. In the next 10 years, the situation will become even more negative. Thus, in order to make clever decisions in the real estate market tomorrow, people should consider already the current trends. 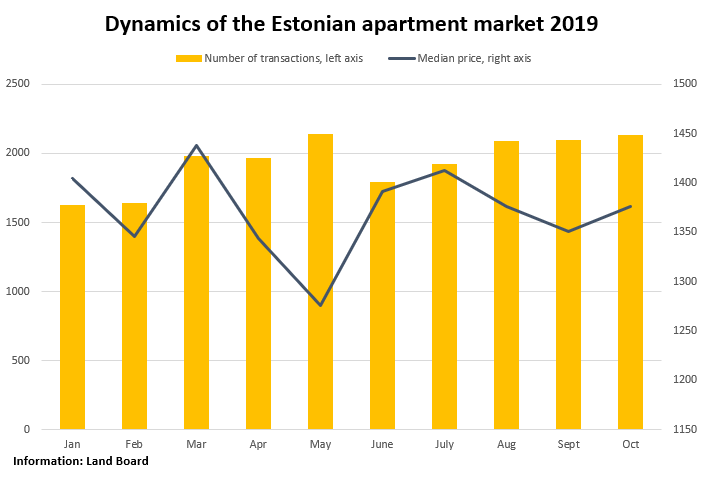 The best result in regard to the number of transactions was achieved in October with 912 transactions. In comparison to the next best month of this year, the figure of October was better by 80 transactions. The main contribution to the increase came from the largest city districts, most notably Mustamäe, as there are not many months when more transactions are concluded in Mustamäe than in Lasnamäe. But that is what happened in October. This year, the median price of transactions has exceeded the line of 1,900 EUR/m2 already before, but the highest result of all time was achieved in October – 1,969 EUR/m2. Thereby, not only new developments contributed to the price increase, as their share was 28% (nothing extraordinarily high) but also apartments of the secondary market where the price increase is virtually as high as in the new developments. The new developments to prevail in the market were the developments of Kopli Lines, Veerenni district and Sääse Home. As predicted before, the number of transactions shall remain rather stable, unless greater changes take place in the economy; the quicker increase of the asking price of new developments, however, means that soon we will have to get used to overviews where the median price begins with number two.

Similarly to last year, seasonal effects can be observed in the real estate market of Pärnu, which are especially obvious in the situation where the share of the market of new developments is lower in some months. 73 transactions were concluded in Pärnu in October, which highlights the fact that the title of summer capital is history for this year. Compared to the beginning of the year, the market was slightly more active but in the last three months, 78, 78 and 85 transactions have been concluded in Pärnu, and thus we can speak of a decrease by 15–20 transactions. The small volume of new developments is also reflected in the median price of transactions, which was 1,163 EUR/m2 in October, remaining on the low side of the year.

October was one of the most active months in the market of Narva, with the number of transactions crossing the line of 80. The median price of transactions, however, moved to the opposite direction – 352 EUR/m2 was the third to last figure of this year. The problems of Narva can actually be extended to all the Ida-Viru County and changes will happen only when large investments are made in the region and the prospects of people will improve. Until then, Ida-Viru County as virtually the only county where real estate transactions have not increased in the past years shall have to face one of the highest unemployment rates in Estonia and a shrinking population.